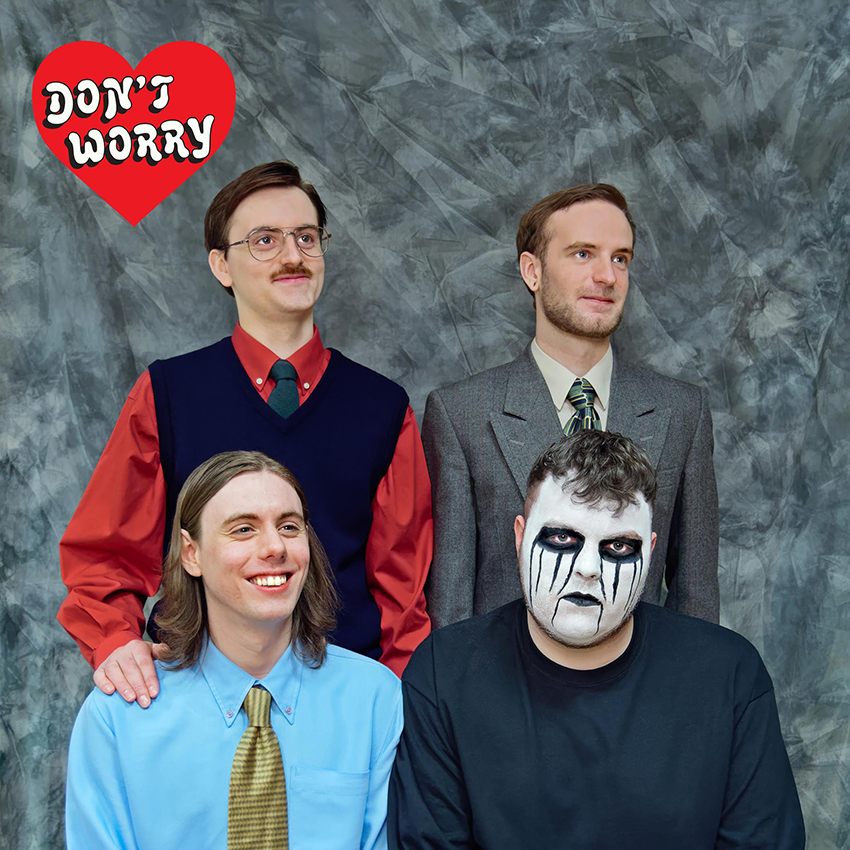 Kay: Okay, so firstly, how are you? What have you been up to lately?

Ronan: I'm good thanks! I've been trying to cycle 3 miles every other day, did that today. I've also been driving myself slightly mad booking our tour, but it's done now, so hopefully I can relax. How are you?

K: I'm pretty good thanks! Saw Superchunk in London the other night and it was one of those gigs that made me really excited about live music and bands and punk and all that. How has booking this tour been? Is it nice knowing you're going to be celebrating then new album with it?

R: That sounds great. I need to listen to more of that band. I also need to go to more gigs. Booking the tour went ok. As usual, filling the last few holes was a bit stressful. But it feels good now it's all sorted. It's been ages since we've been on tour, so I'm really looking forward to it!

K: That's cool! Have you booked many tours previous to this one?

K: You've been over to mainland Europe a couple of times right?

R: Only once. But it was a couple of weeks long. Hopefully again in Sep/Oct.

K: Nice! Do you feel like after those experiences you know the right people to ask, and where the fun shows are going to be?

R: There are definitely a few places we'd love to go and play at again. There are 1 or 2 we know to avoid as well! I think most of the people who booked us last time are still doing gigs, so that should get us started with the next one. It can be hard booking shows in mainland Europe for a small band like us. But generally the promoters out there seem a little more enthusiastic!

K: Do you feel touring is still a necessity for a smaller band? How do you weigh up fun vs costs/reality of tours?

R: I suppose it depends on what you're trying to achieve as a band or artist. I'm sure there are plenty of people out there who enjoy making and releasing music while never playing shows. But we really like to play live. For us it's probably the most important and fun part of being in a band. I think if you want music to be more than just a passion or hobby, then touring is pretty essential. Getting a tour together can be a lot of hard work for a smaller band, and actually going and doing it can be very expensive. But we're really lucky to have never actually lost money on tour. I guess if we ever managed to get to a point where we could go on tour and not have to worry about messing up our own personal finances because of missing work while we're away, that'd be the dream. Modest goals, you know.

K: Totally- do you have any bands on your dream list you'd love to play shows with?

R: If we're being more realistic, we were all very into that last Smith Street Band record, so it'd be really cool to play with those guys. Manchester Orchestra is an all time favourite band of mine, so that'd make me well happy. Also off the top of my head maybe Joyce Manor or The Hotelier, to name just a couple. If we're being unrealistic: Weezer, The Darkness, Deftones, and Bruce Springsteen.

K: Haha, totally want to see you supporting The Darkness!

R: Hopefully they'll let me come up and do guest vocals on Love Is Only A Feeling. 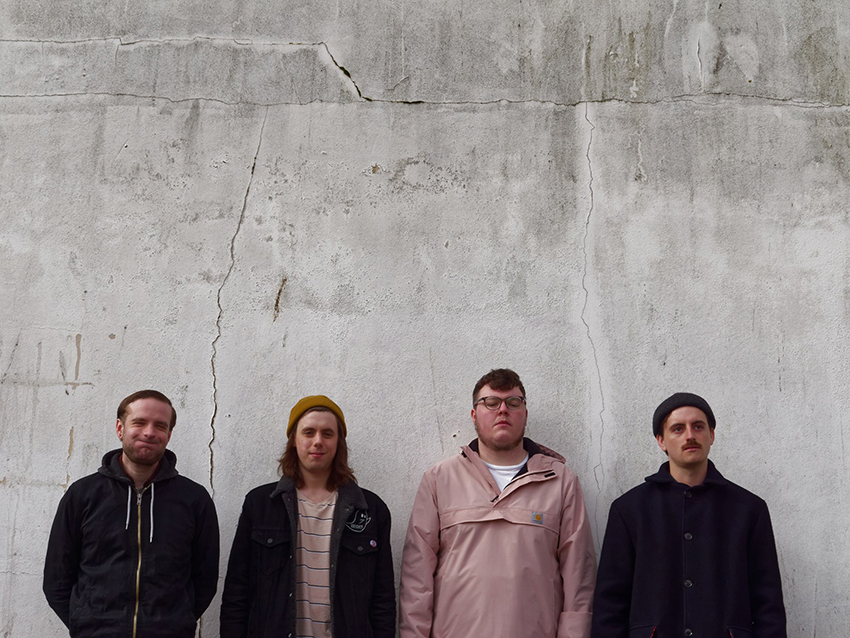 K: I think what Andrew and I immediately liked when we met you all was that you're all very level-headed and I guess 'get' DIY in the same way we do, which to be honest is pretty refreshing, especially since our paths hadn't really crossed before! How do you feel about the UK DIY scene and being in a band which does a lot of stuff yourselves?

R: Thank you! We never really set out to be a DIY band for the sake of being able to say we're "DIY" for kudos, or to fit in anywhere in particular. But once we formed the band, I guess we worked out pretty quickly that it isn't that hard to put on a gig for yourself or to make merch yourself and sell that to keep it all going. We all played in bands previous to Don't Worry, and maybe those earlier experiences taught us that it's pretty hopeless to wait around for some elusive music industry type to notice you or whatever. Once we started doing things ourselves, it just grew and grew and we've met so many great people as a result of that, which is one of the things I value most about the whole thing.

I think the UK DIY scene is great! I mean there are dozens of bands that don't have any massive financial backing but still manage to tour all over the place all the time. It's fantastic that there are enough people supporting the scene for that to be able to happen. The local scenes around the UK have their strong periods and not so strong periods as promoters come and go. I think we're all very fortunate to live in a place where all of this is a possibility!

K: Being DIY also gives you loads of freedom for creativity and we've seen with Don't Worry that you're creative across the whole band- from songwriting to artwork and videos, can you explain a bit about the concept behind the cover artwork for the album?

R: So when I was probably 15 I was chatting to my friend's brother who was a few years older and at college. He was a metalhead and we were talking about how people judge each other based on what they wear or listen to etc. He told me a story about this other dude who used to turn up to college every day in full corpse paint, rain or shine, which I respected massively back then and still do. I'd actually seen this guy around town myself a few times. Apparently my friend's brother once visited his house, it was a big posh house, and hanging in the hallway as you walked in was a huge framed family portrait. In this portrait, the guys mum, dad, and sister were all wearing what you'd expect a family to wear in that type of portrait, but the guy was wearing black and still had full corpse paint on! Although I never actually saw this myself, the image stuck with me ever since. When we were planning the album artwork, I thought it wold be fun to try to recreate this image. The rest of the band nominated me to be the goth. The album cover certainly isn't meant to mock anyone or anything, I've always been fascinated by goths or anyone else with that much dedication to a subculture, and in some ways I wish I was brave enough to be one myself.

K: Yeah I have absolute admiration too. We see it as being brave when really they are expressing who they are and it's like a no-brainer for them, to dress of be any other way wouldn't be being true to themselves! I wonder what that guy is up to today

R: I like to think he works in an office or something but still rocks the corpse paint every day!

K: You seem to have a cool team of friends and family around you who are creative and help you put together your concepts into artwork and videos, is that typical of the area you live in and your friendship group growing up there?

R: We're from a place called Harlow in Essex. It's a New Town built after World War 2 to ease overcrowding in London due to bomb damage, essentially. It was designed by a bloke called Frederick Gibberd with a sort of relative utopian convenience in mind that incorporated the existing nature. Since then, various different people have taken control of the powers that be and mostly disregarded that original vision. Nowadays Harlow has a reputation for being a rough dead end town, especially among the people who live in the affluent countryside that surrounds it. But I think us and our friends have a certain love for the town, and I for one feel fortunate to have grown up here. It's pretty safe to say that most people in Harlow aren't really into alternative music, art, or subculture. But just like anywhere else, the few people who are sort of stick together and help each other. There used to be a music venue called The Square that was a hub for all of this stuff, but unfortunately it closed down last year. There are still a few things going on though. Our friends Harry (Sam's younger brother) and Abbie are visual artists and have just opened Snootie Studios in town. We've collaborated with those guys on loads of stuff, including all the designs for the new album.

K: That's really interesting- I wonder how different the town would be if it reverted to the original ideals and plan. Does the place inform your songwriting and themes in the album at all?

R: It definitely creeps into the lyrics here and there. In the song Big House, "seventeen roundabouts" is a reference to the number of roundabouts just down one long road in Harlow. Harlow is famous for its roundabouts! In fact, "Mood Swings & Roundabouts" was another contender for the album title, but it ended up being the name of a song instead. The lyrics on that track are definitely loosely about Harlow, particularly in the spoken word sections.

K: Is it a kind of love/hate relationship with the town?

R: Yeah I guess so! I think growing up here has taught me a lot, and I certainly don't regret spending any time here. But now I'm a bit older, I'm not sure I want to stay here forever. I think Sam and Dick feel similarly. Alex isn't actually from Harlow and has never lived here, but he was born in Essex. The town has a lot to offer, and there are all sorts of diverse and great people who live here. But sometimes it can feel pretty bleak and desperate, particularly in the winter.

K: Yeah I grew up in a place I couldn't wait to escape from, and I do feel bad for leaving sometimes, but also it's the best thing I could've done & I'm proud of myself for getting out! Okay, so final question- if the person reading this hasn't listened to Don't Worry before, what should they expect from the album?

R: Who Cares Anyway? is 11 and a half songs about various topics from the mundane to the deeply personal. Lyrically, the songs are sometimes light-hearted but often cathartic; they deal with topics such as how difficult, confusing, and frustrating it can be trying to navigate life as a young person in the 21st century. Musically we take inspiration from 90s bands like Weezer, Pavement, Built To Spill, Teenage Fanclub, and Dinosaur Jr, back through to The Smiths and The Cure, all the way back to The Beach Boys. More modern influences include Manchester Orchestra and Modest Mouse. Although we're certainly not a comedy band or anything like that, we feel like it's important not to take ourselves too seriously as people, and to retain a sense of humour in our songwriting and everything else we do - I think this is evident on the album too.

We're confident that these are the best songs we've ever written, and thanks to Bob Cooper and Carl Saff, they sound better than anything we've done before as well. We're very proud of it, and we hope you like it too!